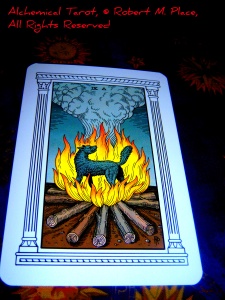 Are you one of those venerable spiritual seekers who, like me, somehow doesn’t happen to have at their disposal four to five years which should be spent in self-imposed isolation, studying some ancient texts and awkward illustrations coded so heavily that all of it seems to be a rather impossible mission?

Do you really believe something, anything can be turned into gold? Bupkes, neither do I! And even if it could be – i mean, really, there are several  easier ways to get gold, especially for a girl, if you know what i mean!

Why bother? Why turn your place into some medieval laboratory and cramp your head with weirdest of formula? Nah, i don’t get it either! Except if, like me, you happen to hang around some  knowledgeable folks where you sort of feel that your thorough ignorance on the matter is rather inappropriate AND/OR you overdosed on Gustav Meyrink‘s novels and now wonder what is it all about?!

I hear you, but i am equally lost here! One way around it is to get yourself The Taoist I Ching translated by Thomas Cleary and start from there; MA in Chinese Philosophy and fluent Mandarin are not obligatory – but indeed are recommended.

Or you can always get yourself a proper Alchemical Tarot , created by someone as wise as Robert M. Place and – after taking 3 to 4 years to learn Tarot itself, you can launch full frontal attack on Alchemy from there. (That’s what i tried to do, yet Alchemy resisted by completely defending itself!)

You can also get Adam McLean’s fantastic courses on Alchemical symbolism, but i’ve done courses with Adam and he means business – no patting on the back from him, no ‘alchemy for dummies’ stuff – so this alternative, i believe, is filed as a part of those initial 4 to 5 years, which, as it is, i don’t see myself devoting to Alchemy!

But, if seriously, why 4 to 5 years? Well, it’s the 10000-hour rule. In his book Outliers: The Story of Success,  Malcolm Gladwell goes in-depth into how successful people become successful and the 10,000 hour rule refers to the fact that most people get really, really good at something after 10,000 hours.

That’s about 3h a day for 10 years – or, if you are ambitious, 6h per day, during 5 years. Right. I know many will scream: it doesn’t take that long! It does. Try a foreign language, Kabbalah studies, violine, anything; if you want to be good in it, that’s what it takes (if not more).

The way i am wired, i hate things superficial – think of  Stellium in 8th house, my natal Sun, Moon and Mars being in the house of occult – and you get an idea where i am coming from.

There is that famous kabbalistic story of a newbie who, having been dismissed by other sages, approached Hillel the Elder asking him how to learn Kabbalah while standing on one leg – which is in briefest possible period of time (there is also a more religious version where it’s a convert asking about Torah); and the answer was: “Love thy neighbor as thyself,  now go and learn!”

So it’s the intent that matters in the first place. I can’t recall misers who got great at something. Right, we are all human and there is, as they say, ‘plenty of good in the worst of us and plenty of bad in the best of us’, but i really don’t remember encountering  a mean person who achieved impressive knowledge; it seems that latter requires  a kind of thinking which, in its turn, somehow includes love for the proverbial neighbor. Or something like that.

I read numerous hostile texts where various authors – who presumably achieved greatness in some rather obscure by ordinary criteria fields – were going like: don’t think you can achieve this and that without the metaphorical blood spitting! Oh, yes, you can. Not that every path doesn’t have it challenges – of course it does, but if it’s meant for you, you’ll somehow have all the endurance it takes.

I am all for free will concept and although, obviously, absolute freedom is an abstract category – i am keen on Swedenborg who, for what i know, was the only philosopher/ mystic who claimed we keep the free will even after physical death.

That being said – nobody knows exactly where desire arises; discipline is great, but on it alone, without the desire no one arrived too far. Who or what grants us the desire – is another topic.

I had that desire – and still do – for several (for the lack of better wording) ‘occult’ subjects, but sadly, Alchemy per se doesn’t seem to be one of them.

I meddle with all the Alchemical sources i listed above – but not on a regular bases and while lacking that drive, that incapability to be get busy with anything else – except the chosen subject.

I pulled a card randomly from the Alchemical deck, which was gifted to me by an amazing author and one of the most popular figures in the worldwide Tarot tribe, my dear friend and spiritual sojourner, Frances Ajamian Ktenas.

Here is what the accompanying book has to say on the Nine od Stuffs: “A wolf is sacrificed in a fire. This is an alchemical symbol representing the restoration of the king, who was devoured by a wolf.”

Hmm, knowing Robert’s work, i am certain he does know what he is talking about – but i certainly don’t! I have a vague feeling it has something to do with restricting one’s negative impulses and, like, “sacrificing ” those for personal empowerment which – inevitably – has to go together with the highest good of everyone involved.

But then, that’s Kabbalah and the story of Binding of Isaac when read in-depth, where the horror-like depiction of the presumably capricious and potentially cruel Deity who commands the poor guy to slaughter his own son  – turns into a manual on keeping cool and tempering one’s desire to receive for the self alone with the desire to receive for the sake of sharing, if you know what i mean.

Further, the book says: “the message also suggests sacrifice, especially for a higher purpose, like suffering for the good of others, or being a martyr, or subduing the animal passions for spiritual purpose.”

Right, so my intuition was not all that off! But, if you are counting on me to come up with Philosopher’s stone – please, don’t hold your breath!