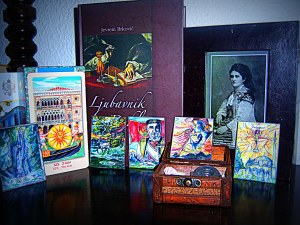 Let me take you on a journey to the magical kingdom, hidden high up in the mountain wreaths of Balkan Peninsula; let me take you to Montenegro!

My country today celebrates its Statehood Day – on July 13 1878 Berlin Congress recognized Montenegro as the twenty-seventh independent state in the world; on this day in 1941 Montenegrins sided with the partisan movement and raised against Nazi occupiers.

‘Am I in paradise or on the moon?’ George Bernard Shaw famously quipped from the top of Mt Lovćen;  to its west – Adriatic sea stretches to the horizon and  on a clear day you can see Italy; to the south is  Skadar Lake, beyond it –  the dark, mysterious hills of Albania; to the north is Kotor Fjord…

To arrive from historical capital Cetinje to Kotor Fjord – once the only way was through the mountains, via a steep, narrow and somehow unusually curvy road… When you look at it from the top of the mountain – you clearly see a capital letter M which seems to be engraved into the landscape by the road – the legend says that French architect commissioned to oversee the construction  in this way declared his love for beautiful Montenegrin Queen Milena – and had ran away from the country for his life! Whether the story is true we can not know, but Montenegrin women are indeed known for their beauty – King Nikola and Queen Milena’s daughters had married into the most influential European dynasties and our King will be nick-named “the father in  law of Europe”!

Elena of Montenegro (born Princess Jelena Petrović-Njegoš of Montenegro)  was  wife of Victor Emmanuel III and Queen of Italy from 1900 until 1946; by Italians she was named “La Bella Elena” – beautiful Elena.

Two of our other princesses, with keen interest in the occult,  Milica and Anastasia, had married into Romanov dynasty  and it was them who later on introduced mysterious Rasputin to the Russian Court.

It is difficult to speak realistically of this country – not only because it immediately gets under your skin and you become overwhelmed by its beauty and allure – but because traditionally here myth and history go hand in hand.

If you read serious historical sources – you’ll learn of False Tsar Stephen the Little; for my PhD thesis i studied carefully archives of Russian Ministry of Foreign Affairs and the diplomatic correspondence exchanged between two courts – Montenegrins were fully aware that their ruler had a false identity; but did they care? Not the least – he was a great ruler and that was the only thing that mattered; where he came from and who he was in reality – nobody knows until today.

Do you know which was the longest war in history? Montenegrin – Japanese war which lasted from 1905 – 2006! When Russia declared war to Japan, the teeny kingdom sided with its ally and also proclaimed war to the Country of the Raising Sun! Albeit the answer was never received – Montenegrin gesture was not merely symbolical – the best warriors chosen from the most reputable of the tribes, along with Russians went to war, fought bravely, won victories and received medals! Again, all of it is documented in the archives of Russian Ministry of Foreign Affairs where the names of these people who fought against Samurai and the awards they received are meticulously listed!

Then super powers got busy with their own business – and the war was almost forgotten… Still, in Montenegro a story is told how group of TV journalists from Japan came to film the customs of these intriguing highlanders – one elder in the village high up in the mountains, upon hearing which was their country of origin  – got his riffle and held everyone hostage until much later local police released them, but not without long negotiations with the old man!

And it’s only in 2006, when High Representative of Japanese Government traveled to Montenegro to recognize our regained independence –  that the truce was signed!

Circumstances were such that I returned to my country only when i was in my late twenties; for you, here is an excerpt from my memoir on how i imagined it, while growing up far, far away from it:

I would wake up to the repetitive, dull noise of tennis balls bouncing off the paved court in the immediate vicinity – it was placed just across the narrow chestnut alley from our house. It is the only noise i can recall in the Prague’s residential area where we lived, the cars had no business in our one-way street and the whole neighborhood had an aura of a creepily silence.

The lack of noise matched the reserved and distant attitude of the people i’d occasionally meet in the street – albeit they were few; this was a residential area, historical villas were placed in a resigned distance from each other, like estranged spouses – still vaguely familiar, as the houses were built in the same period and quite alike – yet by choice alien to each other.

I never knew who lived in other houses with flamboyantly decorated facades, residents would come and go by their big black cars and only by small silk flags with golden fringes i could guess which country they came from – so far – while looking through the rounded window of my room – i had recognized French tricolor and red Turkish flag with its white crescent moon and a star.

I’ve seen many Turkish flags – in centuries long, fierce battles with Turks, the highlander warrior tribes – ancestors from father’s side of the family – had seized numerous Ottoman army flags and had brought them to the capital of the small country high in mountain wreaths of Balkan Peninsula, the former Kingdom of Montenegro. I counted them, in the museum which used to be the court of our only king – Nikola, they were forty four, forty four torn and soaked in blood flags seized in battles which small nation had won against the big and evil empire which wanted to enslave us, or so i was thought…  Prague, a coming of age story; Copyright©2012 Lena Ruth Stefanovic, All Rights Reserved

This essay was inspired by a great article Barbara Moor wrote for Llewellyn – “Vacation with the cards”: http://www.llewellyn.com/blog/2012/07/vacation-with-the-cards/comment-page-1/#comment-40587

I hope all of you will one day come to visit Montenegro – until then enjoy Tarot of the Black Mountain which genius artist Emily Carding devoted to this land and its people: http://www.aeclectic.net/tarot/cards/black-mountain/

The Sun card is from amazing Tarot of Venice (G. Berti, A.Wauters, D.Tonato;  Dal Negro 2007, All Rights Reserved) –  over years, as many had heard of my country but didn’t know exactly where it was, i got used to explaining our geographical location in the following way: JUST ACROSS THE SEA FROM ITALY!

“The case with the hidden treasure” hosting the Lovers card is made by amazing German artist, mystic and a friend of mine –  Morwenna Morash, you can see some of her other artwork here: http://www.flickr.com/photos/morwenna_art

3 thoughts on “A Vacation in the Magical Kingdom”