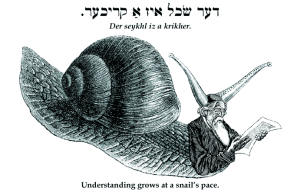 On occasions i feel overwhelmed and i start doubting everything i know and even my own experience.

At times like that, Tarot doesn’t talk to me. I look at the beautiful patterns in which the vegetation grows on Tarot de Marseilles cards, i gaze at the smirky Empress and elegantly crossed swords – and as much as i appreciate cards’ poise and grace, i don’t have the slightest idea what they mean.

Sometimes it is the same with life itself, sometimes it’s good , sometimes it is not – and the direct or even indirect cause escapes me, regardless the analytic skills , logical thinking and even despite the intuition and all the oracles.

Before, at times like that i would wallow in existential sorrow  for days and even weeks, but as of recently i have learned some kind of proverbial acceptance.

In terms of I Ching, it’s in the twelfth hexagram – Stagnation/ Standstill – when  “heaven is above, drawing farther and farther away, while the earth below sinks farther into the depths.”

This shall pass too, everything does – but when i get this  feeling that all i do is in vain –  like this morning – i get together with some dear(est) to me people  and head for a coffee at local Costa cafe and some shopping at the nearest mall; when all else fails, these two activities proved to have the desired healing effect on my existential anguish.

They say the most powerful Chinese curse is ‘May you live in interesting times’ (alternatively – in the times of changes), albeit i never heard it from Chinese; after all it seems the saying  originated with an Oxford educated British gentleman, Sir Knatchbull-Hugessen – Her Britannic Majesty’s Ambassador to China in 1936- 1937.

In his memoir written a decade later this diplomat in career notes: Before I left England for China in 1936 a friend told me that there exists a Chinese curse — “May you live in interesting times”. If so, our generation has certainly witnessed that curse’s fulfillment  (Hughe Knatchbull-Hugessen, Diplomat in Peace and War, 1949.)

Sometimes i think of my own life in terms of a prolonged Zazen meditation for as the time passes by  i merely witness the impermanence of various doctrines,  ideologies and systems; most of them turned out to be more fragile than my grandmother’s porcelain – you see, i still have my granma’s hand painted figurines and bowls, while i left behind three state unions, several ideologies and a concrete wall – that of Berlin…

The aim of Zazen – as well as of other Buddhist meditation practices – is to  detouch from the thought process and stemming from it judgement by letting it all pass by, by observing without involvement or reaction. It’s easier said than done – but the results can be awe-inducing as in some moment of (presumably non-existing) time we might get to peek at the reality as it is, without all the layers of preconceptions, social conditioning and emotional baggage we normally carry around… It happens seldom, but it is indeed worth years of sitting in oblivion (alternative translation of Zazen being: sitting and forgetting.)

I think all Westerners*, my little self included are suckers for proverbial meaning, yet sometimes it is painfully lacking – or at least it seems so.

*I use the term loosely for everyone who’s been born into or living within geographical confines of the vast area where the civilizations called by umbrella term Judo-Christian has been predominant.

Be it the religious zest, characteristic of conservative circles, or the hard work by which at the time Protestantism had replaced the traditional fasting and praying – we all by default expect some kind of meaning to surface from somewhere – and to justify it all, the effort, the pain, the restrictions and sleepless nights.

On the other hand – those who ‘play against the rules’, by default expect some kind of punishment, sooner or later – because that’s what education is all about: awarding the desirable behavior and punishing the behavior which is unacceptable for the given society.

Murder, theft, adultery etc. aside – as these by now are deeply ingrained as wrong in the collective unconscious – we’ve been conditioned in our formative years to believe all if it makes sense at the end and the life unfolds by some kind of rules… Kabbalists of course have their own idea of what these rules are – and these are not  very different from, lets say –  Platonism, where the meaning of life is in attaining the highest form of knowledge, (which would be the Idea of the Good and thus human are duty-bound to pursue it/ the Good), or other schools of Greek Thought to which Judaism and Kabbalah are usually juxtaposed.

Even nihilists and chaos magicians have pre-existing sets of believes and wherever we have those (read: everywhere), the door is ajared for disappointment which more often than not doesn’t make us hold the breath for too long before it arrives.

I must digress: certainly, Hellenism was a threat to Yiddishkeit and a lot of blood is spilled to preserve Jewish values – yet it is indeed difficult to explain  in a non-dogmatic way what exactly is at the core of these believes – even to someone like me who not only studies them at academic level, but also believes in this system and lives by it; more so – there probably isn’t even a need to do so, for those who are overwhelmed by desire to understand it will certainly look up some way more reputable sources.

Bertrand Russell’s ‘History of Western Philosophy’ is often scorned at in academic circles as being overly simplified, but in fact this opus gives a pretty clear insight into the overall development of the human thought from it’s dawn to somewhere around/after Carl Marx.

I adore Russell for he was the first one to take down the philosophers from their imaginary pedestals and talk of them and their reasoning as it should be done – with a lot of common sense, without glorification and idolization;  it is definitely not the book recommended for PhD programs – yet i always go back to it for it succinct style and certain – albeit veiled – humor.

Anyhow, all good, until we get to Jewish thought – right, Russel does go to great lengths to introduce Maimonides for example, but he is very  honest in admitting  (paraphrasing) : I respect this people for fighting bravely and sacrificing all they had to stand up for what they believe in – and that’s throughout history , but why would anyone fight and even die so not to eat pork and to get circumcised – is beyond my comprehension.

What Jews believe is not the topic of this essay, but my point is that humans started thinking more or less at the same time – some six centuries before what’s commonly called the new era – in very different parts of the world – Ancient Greece, Far East (China) and Middle East – in the parts inhabited by Hebrews; all three came up with schools of thought that will rock the world ever since and i am not sure they are not somehow interconnected.

There is a mysterious verse in Genesis (25:6) which says: And sons of Abraham headed to the East, carrying the gifts.

It’s obviously about other sons he had, except Isaac and Ishmael , those of concubines, but whether the mysterious gift they took to the East indeed was the wisdom of Kabbalah – God only knows.

Anyhow, albeit the three great traditions can’t really be compared – there is some familiar feeling that arouses when prolonged periods of time are spent studying and living them, some common denominator does arise… and that very denominator, the pursuit of ultimate fulfillment which by default seems to be imbued by meaning – is indeed ingrained in all three.

At times when gutter raises up to your neck and the stars hide –  keep calm and have a cuppa.

SOURCE: Bernstein, Jüdische Sprichwörter und Redensarten ; this is a free translation – Yiddish word for “snail” (שנעק, shnek) does not occur in the saying and a more literal translation would be: Understanding (or good sense) is a creeper