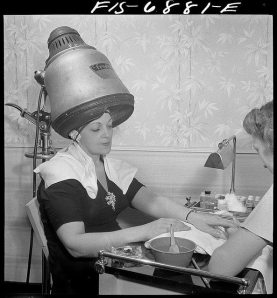 There is this  Facebook page I like, Jewish Story Writing , and they came up with a funny challenge: what’s in this photograph for you?

I’d probably have dismissed it all together – hadn’t something unpredictable happened the other day: I had to rush downtown, albeit in Montenegrin capital in the summer the heat is crazy and it feels as if the concrete is melting… I can’t even think of driving around, looking for parking, so I ordered a cab and while waiting for the car to pick me up, this black and white picture flashed in my mind’s eye…

The ladies from the past, the properly maintained ones whose golden rule was “a real lady always wears stockings”… True, a real lady also was never seen in public without make up and, like my mother, without a wig. Try running errands in Montenegro in the summer in that attire –  I bet you’ll end up in ER with heat stroke!

One of my favorite bloggers posted recently on The Woes of Wearing a Girdle – and albeit her and i agree on all of the important points, i must admit – regardless of everything, I still love gurdle, suspenders and stockings and keep them in my wardrobe, albeit it’s seldom that they get worn… And i have matching 3inch high faux fur slippers too:

…albeit they are “buried” somewhere under pile of boxes with 12cm/ 5inches heel shoes which i also hardly ever wear.

My mother periodically invests into designer (as she calls it) “lounge lingerie”, honestly, as much as i love it, i’d never spend money on that – i prefer getting books and Tarot decks for that money – but that’s my mom and she’s of the time when ladies would sit for hours in the bonnet dryer, so that the perm would be fixed properly… My mother never washed her hair at home – it was done at hairdressers, all her clothes were custom tailored (still are)  and she never learned to drive, because it was considered unladylike.

Mind you, she’s been earning more than my father and was – and still is – what you would call – a feminist, a powerful, independent woman.

When i was a teenager, growing up in Prague – it was still considered improper that a girl goes out in jeans and without make up and, in eighties, we also wore stockings, always, even in the summer.

Then something changed. I am not sure what was it, but even my mother started wearing trousers. She dumped wigs. Even at my previous workplace, it was allowed for women to enter the cabinet of the president with bare legs – which before was unthinkable.

It was late lady Diana who started attending receptions barelegged , so the Royal Protocol had to make an exception and to allow it for everyone else too – if i am not mistaken, when the temperature exceeded 27C.

That’s great – but it went to other extreme were women on protocolar occasions wear beach clothes and men look like they are out for a party of mini golf – and that’s just lack of taste and class if you ask me.

Anyway, these were thoughts running through my head while i waited for the cab the other day, and i thought of Hexagram 22, Grace (also translated as ‘Beauty’ or ‘Adorning’.)

It’s been said that Confucius felt quite uncomfortable when once, on consulting the Book of Changes, he got the 22nd hexagram – of all the people, he was obviously the least likely to get busy with “lending grace to the beard on his chin” as line two suggests – albeit he had claimed  that: “If Heaven gave me another 50 years to live, I would spend them studying I Ching.”

One of the most widely recognized contemporary I Ching scholars – Hilary Barett says that:  “Hexagram 21 is Biting Through; Hexagram 22 is Beauty – only I tend to think of it these days more as Making Beautiful. (In much the same way, Hexagram 13 seems to be more to do with ‘creating harmony between people’ than just finding it already there, a fait accompli.)”

Speaking of which – as of yesterday Pip brought up the prevailing audience’s hunger for non-fiction and particularly – for memoirs; which of course is only continuing the literature argument of the century.

David Shields in Reality Hunger writes: “The novel is dead. Long live the anti-novel, built from scraps,”  he advocates  the lyric essays  and , of course, the memoir.

Most readers know the feeling – there’s a name for this condition: fiction fatigue, as Guardian columnist puts it; the thing is that i don’t want to be cured either and i do tend to believe it might not be a sickness – but a spirit of our age.

For the record – I love surrealism , fairy tales too, SF – anything really creative, unusual and different… It’s the poor imitation of reality that I detest, and most  novels published nowadays  are like that, or even worse – like the poorly written soap opera dialogues.

There are very few novelist whose new writing I am awaiting eagerly (and even fewer short story writers and poets), among them are Hanif Kureishi , Alex Garland and Michael Chabon; others whose books I loved have either passed away – Jose Saramago, or are awfully translated and unreadable in my language– like Llosa, or … you simply turned cold feet somehow, like I did with Julian Barnes whom I used to love, but whose ‘The sense of ending’ was so depressing and boring that I gave up on his eventual future  books;  some writers become too commercial; some  write one amazing novel and then disappear into oblivion, or , even worse, start repeating themselves (which is even worse) like Michel Houellebecq.

Philip Roth and Paul Auster weighted in on the subject, in full honesty – I gave up on reading both of them long ago; Auster is over-rated anyway and downright boring and Roth… well I abandoned his latest – Nemesis – somewhere in the middle, for me it was a waste of time.

I love the new generation of Jewish writers, so called New Yiddishists , like Chabon – equally  happy about their both identities, Jewish and American, or – Jewish and – any other country they happen to live in because that’s pretty much how I personally feel; complex identities and third culture people are the only cure to the world’s state of separation, which luckily we seem to be overcoming.

In Roth’s narrative crammed with “small  people”  crashed under meaningless , yet cruel outer circumstances upon which they have no influence or whatsoever  – I don’t see Jewish values and his writing style lately is downright poor; I don’t care that he sets  stories in Jewish neighborhoods and that his characters are halachically Jews, the essence which I feel between the lines of his writing, the main message – it is sad and miserable and to me it has nothing to do with the essence of Judaism.

As a side note – it’s one of the often asked questions, and I get asked it regularly – what does it mean to be a Jewish writer? I don’t think there is a simple answer to this one – there is a whole sub-genre of kosher novels (boring to death, usually);  there are ethnically Jewish writers who go to great lengths to hide their roots and whose writing does not in any way reflect those, so I really don’t know; many in Diaspora go to great lengths to explain they are universal… But, all of quality literature is universal, it doesn’t matter of which ethnicity or religious affiliation is the writer, so to me that goes without saying.

I can only say what does it mean to me personally to be A GOOD WRITER – and I’ll say it in words of a kabbalist, one of the leading ones in our generation – Shaul Youdkevitch: (a loose translation from Hebrew) Each individual’s life is made of their stories. The most important story is told by himself/herself by giving meaning to each object, person and event in their life. It’s us who are the story tellers, so let our stories be good! The quality of the experiences we live and memories that we carry along – is determined by the very meaning we give to things surrounding us. As we appreciate every detail in the story, we connect to the Creator and the experience of the creation itself becomes more positive, as we are achieving the sense of fulfillment in life.

Keep telling good stories –  in whatever genre you like, and even if you don’t write and even if it seems there is no audience… The universe is always out there, awaiting eagerly for you to tell  your unique story. Make it a good one, make it beautiful.

Have a great weekend all, to those who observe: Shabbat Shalom!