International Book Fair 2013 opened today in Montenegro’s capital. After the disappointment in Sarajevo (see book fairs aren’t fair ), I was thrilled to see the books represented and honored as they should be.

Ours is far from total sale and it doesn’t come across as a Church on Sundays either – true, fairs are the best to hunt for discounts and I am the first to seek spiritual titles, but let’s face it – book fairs should  be about books in the first place, not about quick buck and dogma.

The fair itself is in the basement of  Delta City shopping mall which for the purpose is redecorated; the air conditioning is perfect – that’s the first thing that you’ll notice at many fairs (even at my favorite Belgrade’s), that there is no fresh air and it’s too hot; this one is just perfect, it feels inside like early spring.

Fair’s Art Director – writer Ksenija Popovic did amazing work, you see her smiling in the pictures – I really admire her because it’s been an immense effort to make it all turn out so well.

Montenegro is among else known for having poets rule the country (Prince Bishop Njegosh in 19th century authored some of the most famous Montenegrin poems and philosophical treatises); here you see His Excellency Minister of  Foreign Affairs, Mr Igor Luksic, who previously served as the Prime Minister and is an upbeat poet too; behind him you can see the Ambassador of Russian Federation to Montenegro, His Excellency Mr A.A. Nesterenko,  to his right (in blue suit ) is H.E. Mr Vincenzo Del Monaco, the newly appointed Ambassador of Republic of Italy to Montenegro

So many books, so little time… Director of the National Theater, professor at the Faculty of Dramatic Arts in Cetinje and dear friend of mine – Janko Ljumovic: 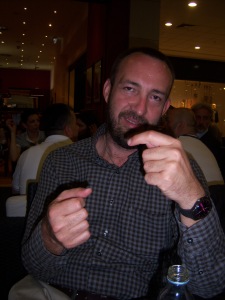 Dubbed Montenegrin Edgar Hoover – an author and former chief of the Secret Service, Mr Vlado Kekovic (to the right) : 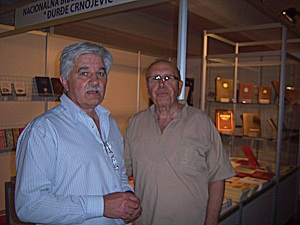 If surrealist were fortune tellers… Introducing Janko to the Lenormand oracle, the amazing little deck said to be read by Napoleon’s and Josefine’s reader – the famous madam Lenormand (it’s an urban myth, but what more can a surrealist ask for? ;)) 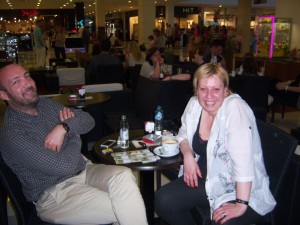 6 thoughts on “Everyone Worth Knowing”