Tarot card from the Rider-Waite tarot deck; a 1909 card scanned by Holly Voley for the public domain

Tarot’s Tower does come across as a phallic symbol and in some interpretations it is read as such*; the Star accordingly could be read as female orgasm – and as connection to sephirot Binah and whatnot.

It’s one of the Major Arcanum I have working knowledge of, but can’t connect to on a deeper level, I don’t get it.

Yes, I know it all – the connection to even more confusing Biblical tale of the Babylonian Tower; for an uber-intellectual analysis of the Arcanum and references to anyone you can think of – from Nimrod to Plutarch, see “Jung and Tarot: An Archetypal Journey” by Sallie Nichols… It is a great book on theory of Tarot and I recommend it heartily, but I do doubt it will improve your practical reading skills even the tiniest bit.

It’s been said before that Tarot is a language – a system of signs in semiotic understanding. As such, it does need to be studied both theoretically and practically. To me personally, the two aspects of studying do go hand in hand, otherwise – theory without practice is abstract and dry, whereas practice without theoretic studying tends to turn the discipline into mere fortune-telling. (Nothing too wrong about it, except that on philosophical level it’s diametrically opposed to the doctrine of  free will, whereas in practice it too easily activates the notorious ‘negative self-fulfilling prophecy’, ie. negative predictions do influence sitter’s mind on various levels.)

I am not going to re-digest numerous valid and known interpretations of the Arcanum XVI, those didn’t do much for me. I did learn over years what Tower means in my readings – it’s usually denoting couple of days of stress and upset, but not more than that. (One of the cards I dislike getting way more is the depressing and dis-empowering Hanged Man, that energy for me is way more difficult to handle than shaky and unpredictable Tower.)

What I wanted to share is an unusual and non-deterministic take on the Tower to which I came during last couple of days, since I relocated once again from Montenegro to Moscow.

See, nevertheless we too speak a Slavic language and albeit my country throughout history had close ties with Russia – our own Balkan mentality and Mediterranean way of living has nothing to do with Russian ways. Italian mentality is close to ours – and no wonder, it is a neighboring country to ours and good part of Montenegro was historically ruled by Venetia. We get along with Turks very well – after all – as much as we fought throughout history, we did live in a close proximity for some 400 years and by now we do have a lot in common, taste in foods and similar cuisines among it. But Russians… as much as we love them, we have close to nothing in common with them – neither the system of values, nor the way of life. And it’s tough for me, every time I come here, to adapt and adjust to it all once again – and here we come to the Towerish experience which I wanted to share.

I wrote before on secondary linguistic personality and cultural adaptation ( you can read an excellent material – Russian source translated into English – here http://www.russcomm.ru/eng/rca_biblio/l/leontovich02_eng.shtml ), learning a foreign language is a profoundly transforming and deeply Tower-ish experience.

Leading kabbalistis of our times, such as Shaul Youdkevitch, say that the language we speak molds our personalities – and albeit I am a doctoral candidate in linguistics, I quote kabbalists way more gladly than linguists and philosophers. (After all, during brief 45 min of intro lecture to Kabbalah – which is mostly on what Kabbalah is NOT-  one learns way more than during hours long, boring and pretentious lectures by Slavoy Zizek for example, at least it is so in my experience.) The thing with me is that by now I speak Russian as a native and they don’t figure out easily I am a foreigner; but my attitude is foreign to them and that brings about a lot of confusion. Our society back home is conservative – and so is Russian, but in very different ways; I am from patriarchal culture, but I am not used to patronizing to which I am exposed over here due to my gender – and Russians are not used to women being as assertive as I am, at least not at my age (I look younger my biological age.) Back at home I don’t act from the framework of my gender – I am a responsible person, a member of the community and most often my gender is irrelevant to whatever I am doing or saying. It’s not so in mother Russia. I was told I speak too much for a woman (by a member of the academy of science, mind you.) I am constantly reminded I don’t need bother too much, it’s suffices that my looks are somewhat pleasing to the eye. That bothers me. I wasn’t raised as a girlie girl – I was raised to be a person, not a girl. More so that at my age and with social position I have back home it is ridiculous to be reduced to some kind of decoration… but it is what it is. I learned so far that there isn’t much point in arguing and explaining feminist premises to anyone, people get it or not. What’s important is that in my own microcosms – in academia and at my own Muscovite University it is NOT so; the treatment I – and most other women get out there… that I can’t change, as much as it bothers me. For the sake of the proverbial intercultural communication, you need to adapt- at least seemingly and temporarily – as difficult as it I; so, I learned a little trick, which makes my Towerish adaptation tad easier to bare – I introduced a heavy foreign accent which clearly marks me as an intruder. As soon as I step out from the comfort of Pushkin University, my faked accent distinguishes me as an outsider, a crazy foreigner, Albert Camus’ Meursault – by choice.

Meanwhile, I skyp with my family, so not to lose my mind completely 😉 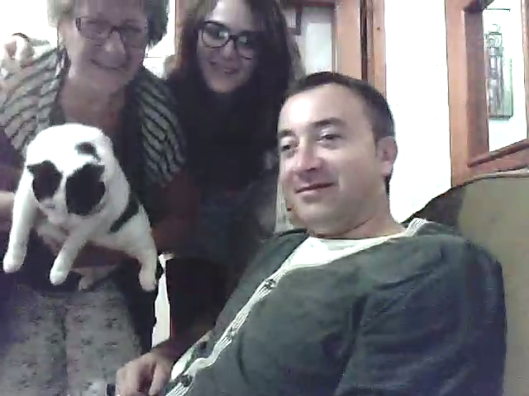 my mom, my fur baby, my cousin Drago and sis in law Vanja; father dearest on the snapshot bellow (he’s just back from a reception hence the tie & all that jazz ;)) 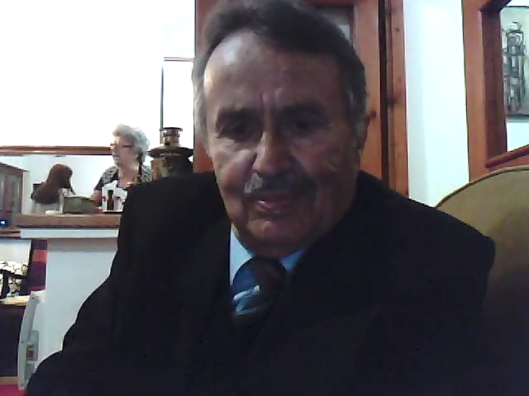 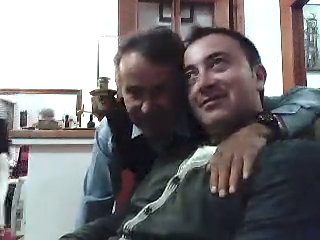