Yesterday in the evening i was gazing at the setting sun from the porch of my friends’ suburban home. The sun sets very late in Moscow. Over here, Shabbat candles, which mark the beginning of the Day of Rest, are lit some two hours later than in the NYC. As i am inhaling the scent of black earth, chernozem, sprinkled by the ephemeral spring rain, i am starting to feel something, which Russians call toska.

As Vladimir Nabokov puts it, “Toska – noun /ˈtō-skə/ is Russian word roughly translated as sadness, melancholia, lugubriousness. No single word in English renders all the shades of toska. At its deepest and most painful, it is a sensation of great spiritual anguish, often without any specific cause. At less morbid levels it is a dull ache of the soul, a longing with nothing to long for, a sick pining, a vague restlessness, mental throes, yearning. In particular cases it may be the desire for somebody or something specific, nostalgia, love-sickness. At the lowest level it grades into ennui, boredom.”
I couldn’t explain in any other language what i feel and, more so, why i am feeling it. In my own culture, such inexplicable lonesome inner wandering is neither understood nor welcomed – and rightly so, Balkan sensuality, our history and the mountains around inspire an all another range of emotions.

I don’t know what i’d call that feeling in English either – and probably no need to label it at all because i don’t feel it out of Russia. Here, my friend Lily glances at me and, without hesitation, diagnoses my state with a verse by Mikhail Lermontov :

It’s boring and sad, and there’s no one around

In times of my spirit’s travail.

It’s not that she or i will do something  about it. Toska is acceptable here, it comes and goes on its own liking and it’s not that you can do much about about it anyway. Toska is not a debilitating sadness or a severe depression – you can be hit by it and go about your everyday business. It’s only that you won’t smile all that much. Smiling isn’t a norm here anyway, so that’s OK too. Other external expressions of toska are prolonged, deep breaths and a specific hand waving gesture which conveys an almost audible “don’t ask…”

Polish Australian linguist Ana Wierzbicka considers toska, along with sud’ba and dusha, to be the key concept of Russian culture.

Sud’ba would be fate in its most passive understanding and dusha  is Russian word for soul, to which way more is ascribed in this culture, than in any other. Wierbicka notices that “dusha” is used in numerous, if not all, sayings and expressions where in English we’d say ” mind”. Russian soul also gets blamed for a myriad of things for which in other languages we blame our vanity, silliness or even lust.

Wierbicka is popular in Russia – to the extent to which a linguist can be popular, you can feel from her work that she is fascinated with this culture and that she, like me and pretty much all the foreigners here, does love it, albeit most of the times it is beyond our understanding. At the predefence of my own Phd thesis, the famed professor Alla Yuryevna Konstantinovna asked me: Do you agree with Wierbicka that the language itself and its key concepts make Russians passive? I don’t. I am not even sure Wierbicka sees it as passivity, she speaks more of a Russian fatalistic attitude towards life itself. That’s how she sees it and maybe, just maybe, it could be explained by some tenants of Christian Orthodoxy (versus the presumed Protestant proactive attitude towards pretty much everything.)

To me all of it could be explained geographically – or, better to say, located, if not explained. The farther you go to the East, towards Asia, the more you’ll feel it – this acceptance of the things as they are and you’ll observe certain (more or less) patient awaiting of the circumstances to change, more and more, as you progress to the East and Far East. Maybe it has to do with the language, maybe with the weather – or we could blame it all on dusha, the black earth and that special scent that birch trees emit in the spring… 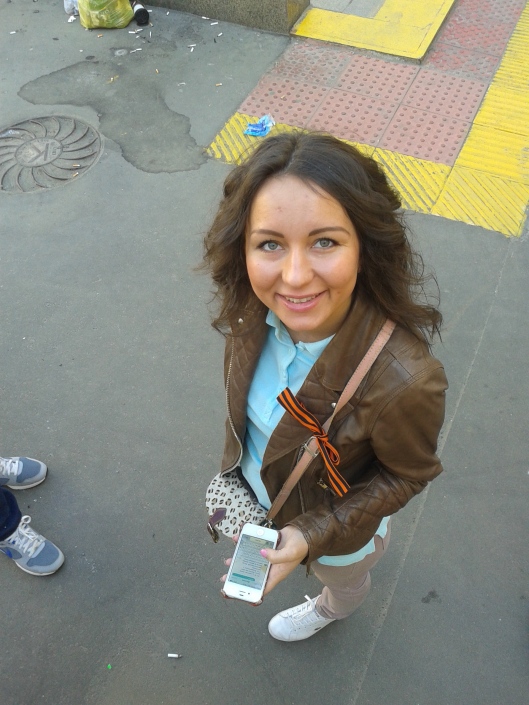 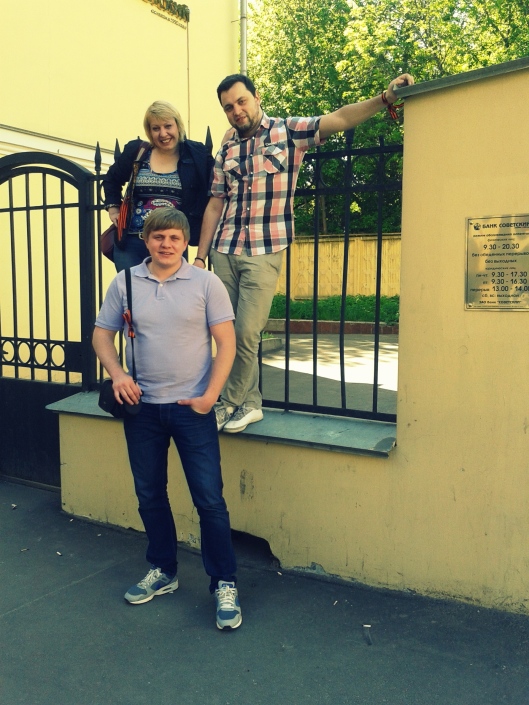 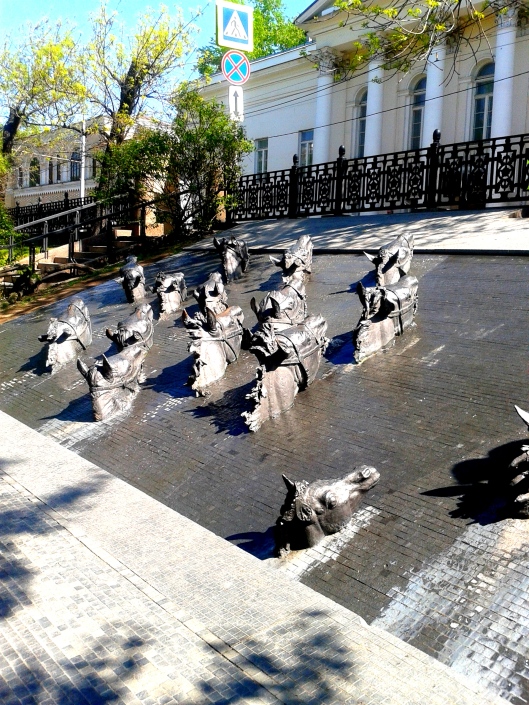 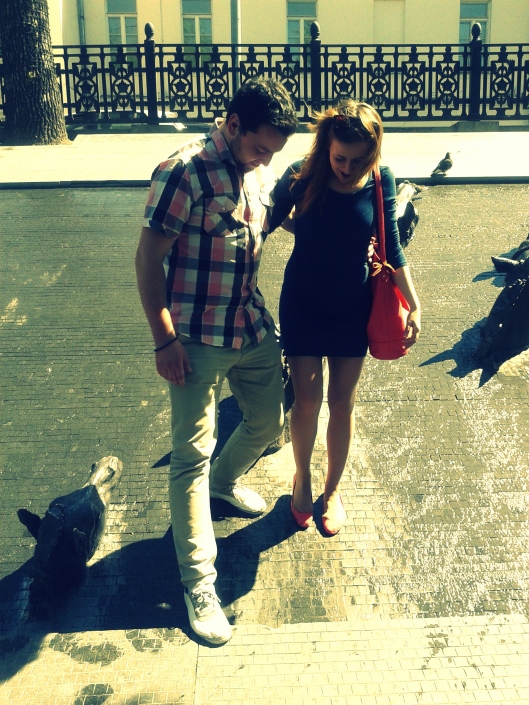 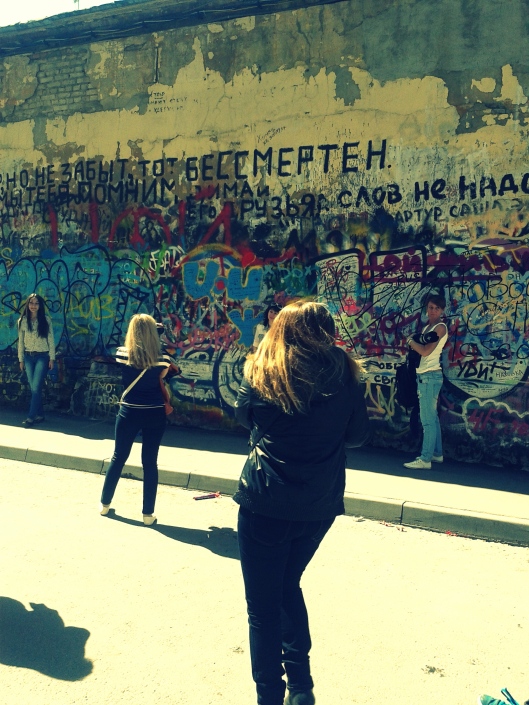 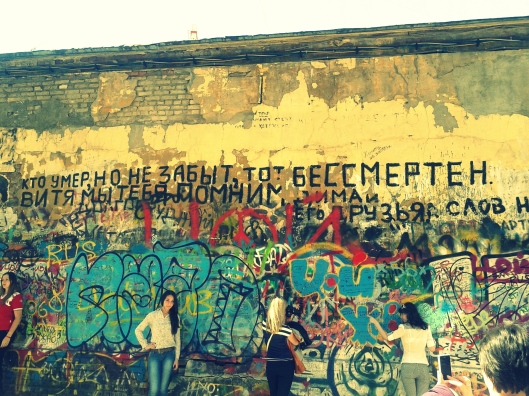 With Lily, Ilya, Sasha and Ksyuha on Victory Day, May 9th, round and about Moscow city (Arbatskaya street, Mikhail Sholohov monument and the wall on Arbat street dedicated to the memory of Viktor Tsoi.) Graffiti on the wall translates as: He/she who is not forgotten, he is immortal.